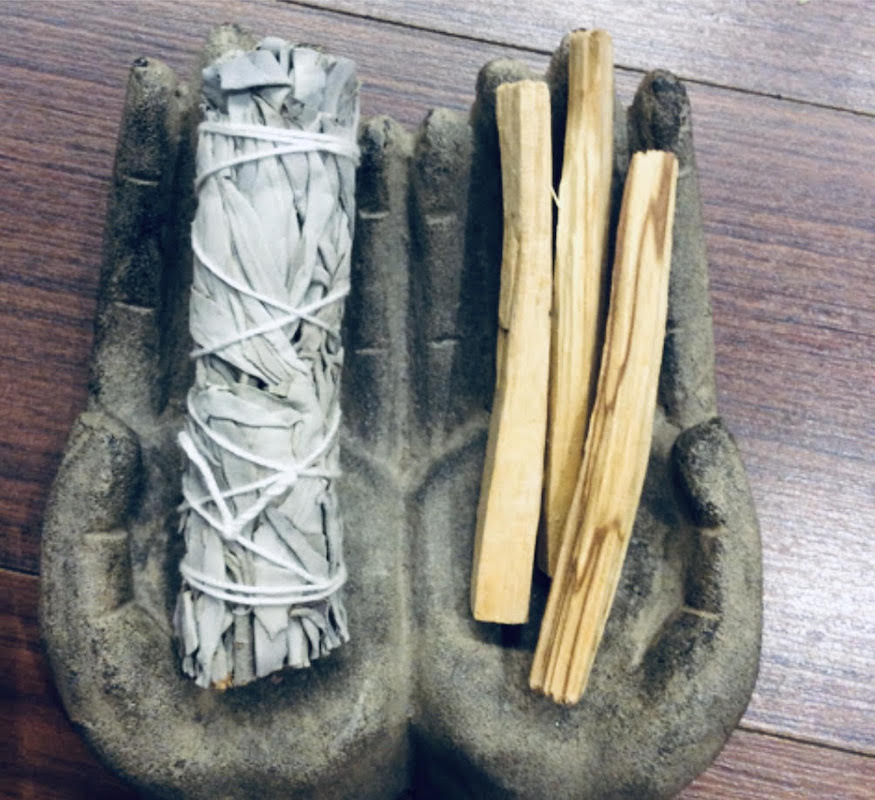 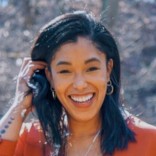 Devon Blythe is a Body-Mind and Wellness Practitioner whose mission…

As New Age beliefs increase and spirituality becomes more of a trend, many individuals are gaining new insight on the metaphysics of energy clearing, particularly around the uses of Palo Santo and Sage. If you’ve been interested yourself, read on for further details.

What is Energy Cleansing?

Energy Clearing or Spiritual Cleansing is when one uses tools, mental constructs, intentions, and/or willpower to clear any lower vibrational energy fields around them and within their environment. It is very important to keep your energy bodies clear and in good health. There are many ways to cleanse your auric field or environment. In this article I’ll focus specifically on the uses of Palo Santo and Sage.

Everything in the universe is composed of vibrations yet most human beings rarely look at the world through this lense. Quantum science has revealed that everything is simultaneously subtle energy and solid matter, which is the meaning of Einstein’s famous equation E=MC^2.

You are composed of energy. So is the air you’re breathing, the chair that you’re sitting on, the animals around you, rocks, trees, everything is energy. And everything shares energy with everything else. You are sharing energy right now with anything close to you including the couch, the people around you and whatever is nearby. Typically we are unconscious about the energy fields around us unless we are energy sensitives or encounter an energy field that is hard to ignore. 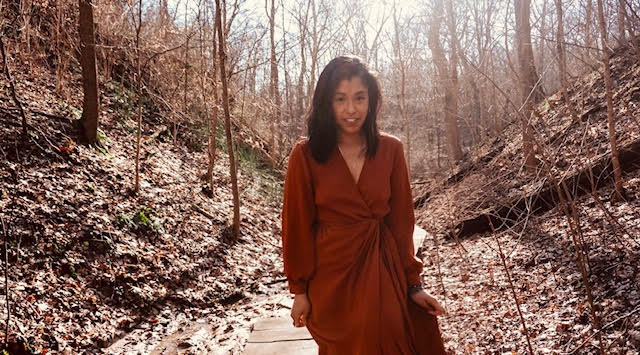 Why Do you Need to Clear Your Energy Field and Space?

Well, we no longer live out in nature where Mother Earth naturally takes care of this cleansing business for us. Our manmade spaces just don’t cut it. Energy gets heavy, yucky and stagnant if we don’t do something about it. I truly believe it’s just as important to cleanse the energy in your space as it is to physically clean your space. I always try to make space-clearing part of my ordinary home-cleaning routine. I know this works because I can feel the difference, as well as others who visit my home. If you really want to feel the beneficial results of this practice, try smudging a dense room, a space where something negative and/or tragic has happened, or a space that simply has a heavy feeling to it. Just give it a shot. Take note of how you feel both before and after smudging.

Smudging is the common name given to the powerful cleansing technique from Native American traditions; however, the burning of herbs for emotional, psychic, and spiritual purification is a common practice among many religious, healing, and spiritual traditions. The practice of burning herbs for purification and cleansing dates back to the beginning of mankind on Earth. And, it is a ritual that has been documented and practiced by many indigenous tribes around the world. It is a ceremonial way to cleanse a person, place or an object of negative energies or influences.

Smudging can be useful when you’re feeling depressed, angry, resentful, and unwell or after you have had an argument with someone. It is common to smudge yourself, the space and all the guests or participants before a ritual or ceremony or celebration. You can smudge your home or work space as part of a general spiritual housecleaning, and you can cleanse crystals or other objects of any negative or lingering energy with a smudging ritual. Smudging is a great way to simply create some extra positive juju, and who wouldn’t want that?! 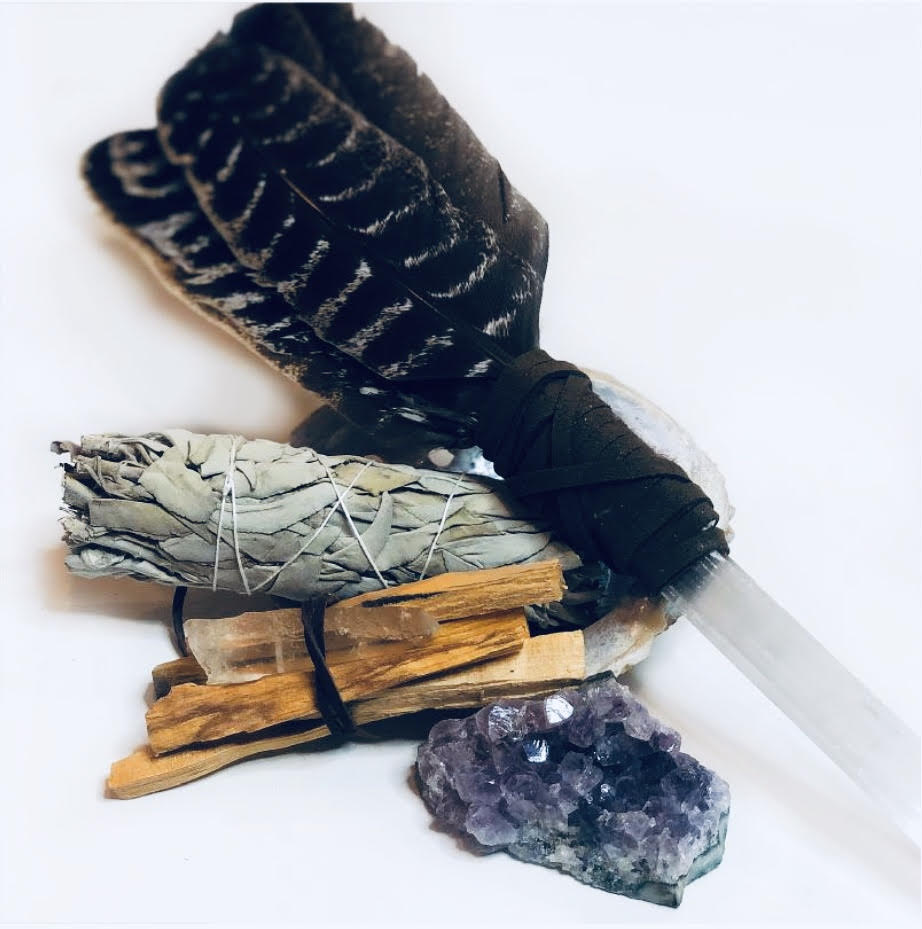 The Science of Smudging

Yes, there is scientific proof that smudging works! Let’s get our geek on for just a moment… Have you ever walked into a space where an argument has just taken place and you’ve felt like you could “cut the tension with a knife”? If so, then you know exactly what I am talking about here. Everything that exists, and I mean everything and anything (a thought, a spoken word, an action, a feeling) is made up of energy and vibration. Basically, anything that occurs in a space leaves an energetic footprint.

When you burn Palo Santo/Sage (or other select herbs and resins) the smoke that flows out into the air is full of negatively charged ions.

These negative ions bond to the positive ions that are already in the air. Positive ions are always around us, and they can start to carry some yucky energy if they start to build up. These positive ions are often produced by power lines, cell phones, televisions, and other electronic devises. Positive ion build up can also be caused by people and/or items that may be carrying some negative emotions, thoughts or feelings. An excess of positive ions has been found to cause damage to cells in the human body, effect brain function, and cause feelings of stress, anxiety, and depression.

Palo Santo is a tree of healing and prosperity and is highly respected and honored by the peoples of its native growing regions for its many qualities and virtues. Its aroma is unmistakeable and its effects are profound and mysterious. It is amazing to watch the reactions of people who experience Palo Santo for the first time; the penetrating smoke tends to snap people to the present moment in an instant while bringing about curious feelings of something sacred, or not quite tangible. Palo Santo, translated to “Holy Wood,” is a tree native to Ecuador, Peru, Brazil, and Bolivia.

Palo Santo has a very uplifting effect that is traditionally used to treat sadness, grief, and depression. Traditional healers and Shamans often bathe a patient in thick plumes of smoke or treat them in smoke-filled rooms, accompanied by prayer and spiritual healing, to cure them of serious depression, sadness, or spiritual turmoil. Some of Palo Santo’s chemical constituents, such as limonene, are know to oxygenate the brain, leading to positive, heightened mental states. It is also used in Indigenous medicine for many other physical illnesses and ailments. Its smoke is commonly used as a strong mosquito and insect repellent in its native damp jungle habitats.

Palo Santo has the ability to clear the mind, enhance concentration, reduce tension, clear the atmosphere, and enhance creativity. There is much folk lore suggesting that it is a magical, mystical tree with the power to bring good fortune to those who utilize and respect it.

I personally use Palo Santo to clear my auric field and environment. I suggest that you take a candle (preferably white for the purifying representation and symbolic meaning) and carefully light one end of the Palo Santo until it catches fire. Blow out the fire and you will notice a smoke starts to be released from the holy wood. With intention, waft the smoke around your body and environment, setting an intention to clear any energy cords or lower vibrational energy fields from your body and home. Light the end of the Palo Santo stick as much as needed. I use Palo Santo almost everyday and I particularly like to use Palo Santo incense and/or essential oils. You can find Palo Santo as well as Sage online and usually at your local metaphysical shops. 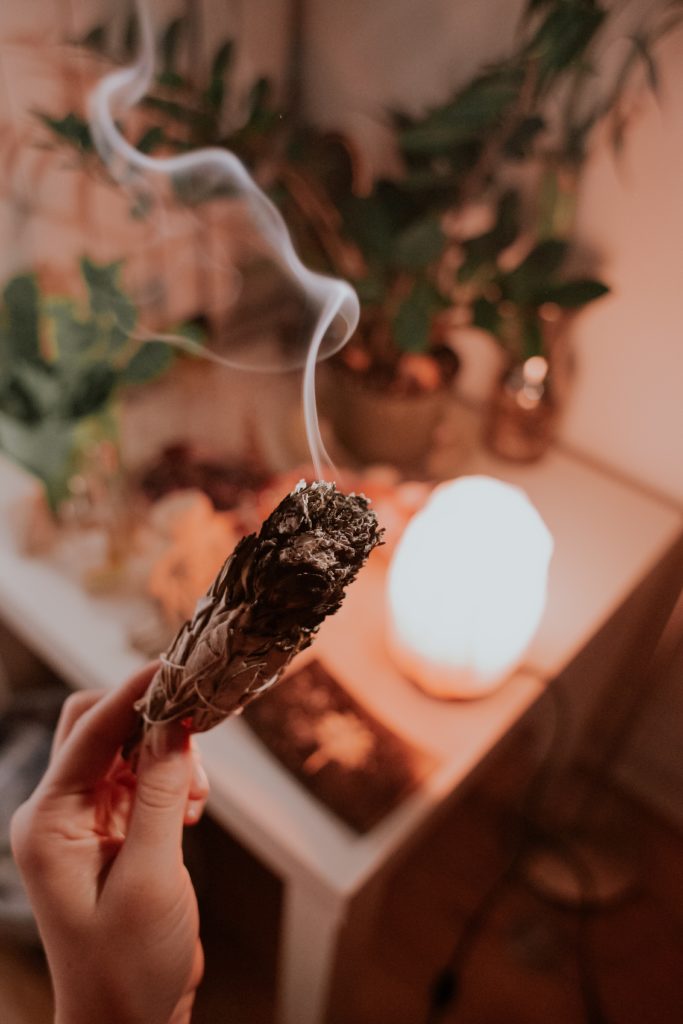 There are a number of different kinds of sage, and all of them are just fine for smudging. However, the most common sages for smudging are Desert Sage and White Sage. Any kind of sage will work just fine, so don’t get too caught up in trying to find a particular kind. I have successfully smudged with Purple Sage, Garden Sage, Sagebrush, Mugwort. Russian Sage, Golden Sage, and Pineapple Sage.

Sage is primarily tied to the element of air though it can also be used as for four-element general purposes. Sage has a somewhat sharp, light and refreshing scent. It is one of the most sacred herbs among Native Americans. Sage is well known for its ability to purify the mind, body and spirit before prayer, meditation, ritual or ceremony. Sage is often used for area and personal cleansing. Some people carry a small amount of sage in a pocket or medicine pouch to insure personal and spiritual safety.

As with Palo Santo, I suggest that you take a candle (preferably white for the purifying representation and symbolic meaning) and carefully light one end of the Sage until it catches fire. (Sage tends to ash faster than Palo Santo so I recommend having a small bowl with you to catch any shedding ashes.) Blow out the fire and you will notice a smoke starts to be released from the holy wood. With intention waft the smoke around your body and environment, setting an intention to clear any energy cords or lower vibrational energy fields from your body and home.

After you have performed your smudging ritual you may notice a lightness around you and you environment, more positive energy, more energy in general, better focus, more clarity among many more beneficial aspects. In general, smudging can be used in daily life for practical purposes to restore physical, mental and emotional balance; to shield against negative energies; to cleanse yourself, your tools and your space; and to restore your sacred space. So if you are curious about energy clearing and smudging, I encourage you to check out Palo Santo and Sage. They are definite staple in my self care routine and I highly recommend it to all that are open to it. In the words of one of my favorite gurus “Take a break and go smudge yo self!” 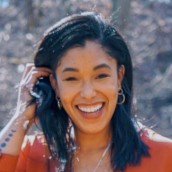 Devon Blythe is a Body-Mind and Wellness Practitioner whose mission is to support universal and individual healing while expanding conscious awareness in humanity. Devon has extensive training in a wide variety of wellness practices and today her work focuses on spirituality, life coaching, and bodywork with an emphasis on self knowledge, conscious awareness, mindfulness, meditation, breath work, and holism. Devon created a method called The Balance Effect and founded The BE Company where she works to support as many human beings as she can through her natural gifts of intuitiveness, introspection, and connecting with other humans on a deep emotional level.