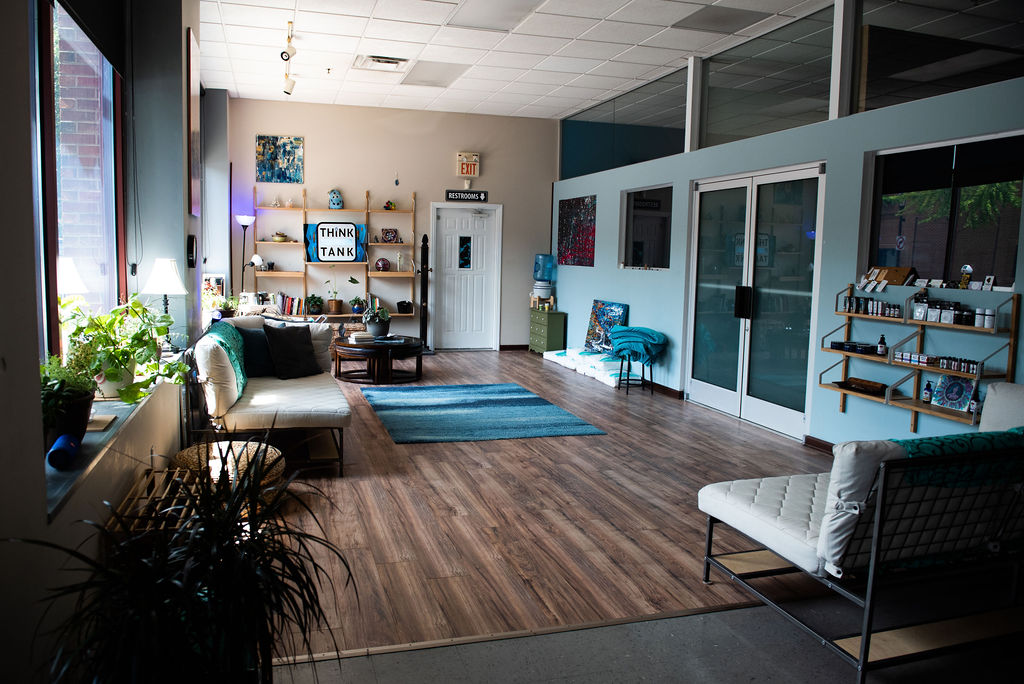 This article was originally published in February of 2018.  Currently, Think Tank is open, is following strict COVID considerations, and has blocked additional time between each client to clean.

When we walked into Think Tank last week for our first float we were thinking, “Isolation Tank. Sensory Deprivation. 60 minutes of nothingness.” These preconceived notions could not have been more opposite from reality.

Joe Daniels, the owner of Think Tank, is a local fitness buff that has consistently pushed the envelope in the health and wellness world here in the tri-state. He seems to live a life of dichotomies, impressively living in the space between yin and yang.

He owns an indoor gym, yet preaches the importance of playing outside. He lifts and swings impressively heavy kettlebells, yet is as flexible as most yoga teachers. He is extremely health conscious, yet we caught a glimpse of chocolate bars laying on his desk (shocking that we noticed that?).  Joe believes in pushing your body to physical heights, yet preaches the importance of rest and rejuvenation, which is how he discovered floating. He used to drive an hour and a half to the nearest float tank, and quickly decided Cincinnati needed it’s own floating devices. When he decided to open up a flotation therapy spa, he refused to describe it (like many had before him) as sensory deprivation, or an isolation tank. Through our conversation with him, we learned why.

Flotation therapy, as described on the Think Tank website, is a type of physical and mental therapy developed by John C. Lilly in the 50’s. Typically, an individual floats in skin-temperature salt water in an enclosed chamber that blocks external light and sound. The tank has enough epsom salt in it to make it saltier than the Dead Sea. The water is filtered through sand and a UV sanitation system, cycling the entire volume of tank water several times in between each floater. Water is also dosed with hydrogen peroxide and tested regularly to ensure safe and effective levels.

Floating is widely known to aid in physical injuries, addiction, PTSD and body image issues. But, it’s also extremely beneficial for those who deal with everyday stress, giving you 60 minutes of complete and total muscle and mind relaxation with zero distractions.

The Think Tank has two floatation tanks.  Each tank has its own room that it shares with a gloriously large shower.  Joe walked us through the entire process step-by-step from the visible high tech filtration cleaning system that is run between sessions, to how to position ourselves in the tank, to how to operate the ridiculously cool shower that looks like it came from the year 3018.  The shower is used before a float to remove any dirt or body oils (helps with the tank cleaning between sessions) and after the float to wash off the remaining salt. Most people float naked. Once Joe showed us the ropes, he left us alone in the room and it was time to jump in and experience floating first hand. Note: individuals float one at a time. Mer floated first, and I floated second.

Since we’ve floated, we’ve had a few people ask us, “weren’t you scared to fall asleep in the water?” The water is just about 10 inches deep, and is so buoyant from salt, that one can’t not float in it, even with effort. You won’t sink, even if you doze.

After showering, I put in earplugs (they provide them, make sure to really shove them in there), climbed in, shut the door, and flipped off the light. The light is controlled by a button inside the float tank. The first 5 minutes were insane– I felt like I was elevated into the air with every inhale I took, and with every exhale, I felt like I was sinking deeper into the water. I definitely had a few seconds of momentary panic, but focused on deep breathing to calm my nervous system. So, at anytime during your float you can turn the light back on if you need to. I kept the light off, but it was comforting to know I could turn it on if desired. My main concern was about whether or not I would feel claustrophobic. I actually didn’t. Aside from the light option, it was nice to know I could exit anytime if I needed to.

After about 5 minutes (and this is a total guess because there is no way of knowing how long you’ve been in there), my breathing slowed down and I found myself in a relaxed state. This is when it hit me that by blocking out some senses (sight and sound) my other senses were not deprived, but vastly heightened. Even the slightest movement I made seemed to reverberate through my entire body. I could feel the effects of simply bending my pinky finger all the way up my arm. And as I bobbed in the water, I felt so alive.  Of course, my mind did race at times, wandering to my to-do list and other randomness (just like every time I meditate). But like meditation, I was able to recognize it, and then pull myself back into the moment.

For some, the idea of an hour of silence might be daunting. It feels really cool to move your limbs through the salt solution (everything is really slow and heavy). You can request that music or a podcast play for some or all of the float to work yourself up to that hour. It also took us both a few tries to get our arms in a comfortable position, so play around with that. Ultimately, I ended up with my hands cradling my head to ensure a comfortable position for my neck.

For me, the 60 minutes flew by. When time was up, soft music sounded, indicating that it was time to climb out and shower. I walked out of the float room to Joe’s sweet daughter coloring. I thought I would feel lethargic, spaced out, and ready for bed. What I actually felt was energized, present, and ready for whatever the outside world had waiting for me. Joe and his girlfriend recognized this right away (I had what they called “float face”).

Needless to say, I am a complete believer in the transformative power of 60 minutes in a float tank. I felt like I had a full night’s rest when I left. I can see this being extremely beneficial to not just people that struggle from specific conditions stated above, but also for people with high-stress lives (AKA, most of us). An accountant during tax season, a parent of 3 balancing work and home life, a college student during finals… really, anyone that feels the stress of daily life and needs to recharge their senses and get back to baseline.

Fit Mama in 30: Prepping Your Body for Labor Step One